A History of Giving
The National Italian American Foundation (NIAF) created the Italian American Relief Fund (www.ItalianAmericanRelief.org) as a vehicle for fundraising in response to the Emilia Romagna earthquake in 2012.  IAR is a coordinated effort to provide immediate response when natural catastrophes and other disasters occur in Italy.

Abruzzo 2009
Part of NIAF’s mission is to serve as an educational and cultural bridge between the United States and Italy. In that role, the Foundation took the lead in forming a coalition of Italian American organizations, universities and individuals in a fundraising relief effort that would raise nearly funds to assist victims and communities affected by the earthquake. The Italian American Relief Fund is an evolution of NIAF’s successful leadership of Italian American relief to the Abruzzo Earthquake in 2009.

In April 2009, residents of Italy’s mountainous Abruzzo region were woken in the early morning hours by an earthquake that shook the very foundations of their lives. The magnitude 6.3 quake resulted in 308 deaths, more than 1,500 injured and the displacement of 65,000 people.  At the University of L’Aquila, administration buildings and residence halls collapsed, with eight students dying in just one dormitory. The academic institution, home to 27,000 registered students before the quake, was ultimately forced to close its doors.

With NIAF taking the lead, a coalition of Italian American organizations, universities and individuals worked tirelessly to raise funds for affected victims and communities. Soon the U.S. Department of State, the Embassy of Italy and the Italian Consular Network joined the coalition to aid the citizens of L’Aquila.  The NIAF/Abruzzo Relief Fund raised nearly $800,000 for relief efforts, while a public-private partnership between NIAF and the State Department helped bring 52 displaced University of L’Aquila students to the United States to continue their studies at American universities. NIAF was chosen by the U.S. State Department to lead this initiative, which was the first public/private partnership established by the Obama Administration. 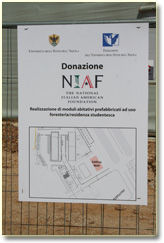 Umbria 2016
The first earthquake struck Central Italy on August 24, 2016, taking the lives of 297 Italian villagers and dislocating tens of thousands. On October 30, a second earthquake devastated Norcia’s ancient village, including the medieval monastery of the Benedictine Order. In response, the Earthquake Relief Fund gave $450,000 to the Norcia community, a town with 5,000 residents, through the means of building a new multi-purpose community center. NIAF is partnering with the Harvard Program in Refugee Trauma (HPRT) to build the community center, which will serve Norcia’s primary school for after school activities as well as a local primary care center. The Italian National Trauma Center (INTC), an Italian nonprofit, is overseeing the construction of the building and will report progress on a quarterly basis to NIAF.